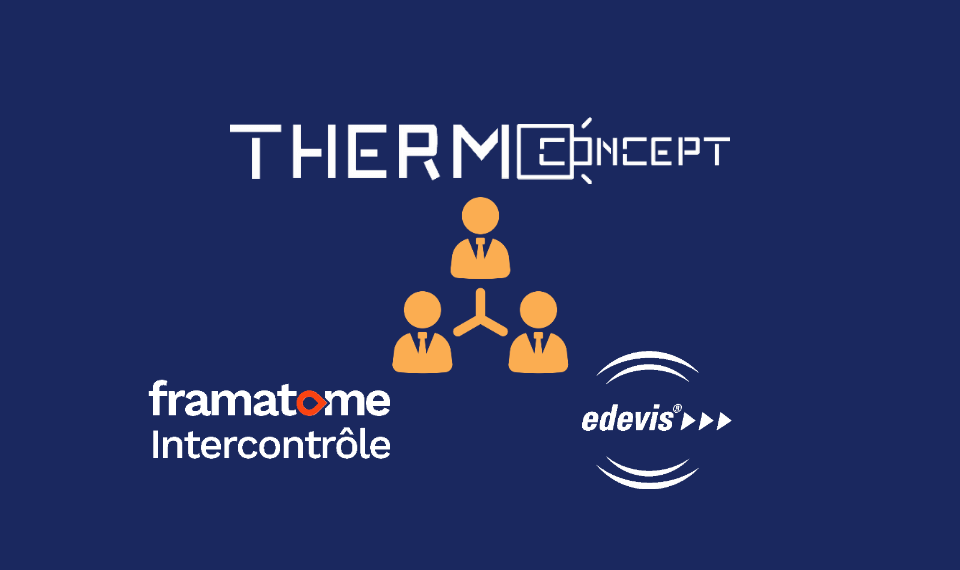 Today we tell you about our meeting with the Framatome team in charge of the Active Photothermal Camera (CPA) project involving:

The history of the Active Photothermal Camera, or CPA, began in the 1990s when Framatome designed the first model of the system. Numerous tests followed with research laboratories at the University of Reims, leading to a thesis. The technology is validated!

What is CPA ?
CPA stands for Active Photothermal Camera. The principle consists of generating a heat flow by locally heating the part to be inspected using a high-powered laser source (50 W continuously). An infrared camera is used to scan the heat flow generated by the laser.
Find all the details of this technology in the following publication: What is the alternative to industrial inspection by penetrant testing and magnetic particle inspection?.

Stéphane BOURGOIS tells the rest of the story « After validating the technology in the 1990s, we started a development phase from 1995 to 2000 which demonstrated the advantages of this technique. First of all, that the technology worked on nuclear applications. Then that it obtained very good results with sensitivities comparable to reference methods such as penetrant testing or magnetic particle inspection. Finally, that the system was mobile and transportable on site to carry out inspections. »

Matthieu TAGLIONE continues « Yes, it’s true that during this period, many tests were carried out, mainly with EDF, moreover, to test the technology as much as possible. They were followed by inspection campaigns, feasibility tests in the laboratory, on fuels for CERCA for example, or on a nuclear site, as at the hot workshop in Chinon (EDF). Another important subject was the inspection of PHENIX exchangers for Novatome. »

« Moreover, this period gave rise to 2 patent deposits with ONERA, between 1997 and 1999. » completes Axelle ELRIKH.

In 2005, Framatome sold its first CPA co-developed with ONERA. This gave rise once again to a patent deposit by Framatome covering part of the technology.

In the years that followed, the team mainly devoted itself to the standardisation and codification of the method for the nuclear sector, while continuing to carry out parallel studies for various clients including EDF with advanced parametric studies for nuclear applications.

In 2010, the team won a study with EDF’s General Technical Division (DTG). This study ensures that they carry out 1 to 5 inspections per year on their coated Pelton wheel turbines, after a significant preliminary performance demonstration phase. Stéphane BOURGOIS explains « Jérôme DELEMONTEZ (Expert Engineer at EDF DTG) asked us to revalidate the conformity of the Pelton wheels after a certain number of hours of operation so that they could restart on a new cycle. These were maintenance inspections to replace the magnetic particle inspection previously used, as the application of a new type of coating no longer allowed magnetic particle inspection. »

Several years followed, during which Framatome continued to carry out numerous study and inspection campaigns, always with the desire to make progress on the development of their CPA. Matthieu TAGLIONE gives us an overview of the situation at that time « The technical aspect was already well advanced. The technology was operational and widely validated by all the tests that had been carried out, including in cases where other methods did not work. Defects are detectable under coatings, on degraded surface conditions, under any conditions, including in the ceiling position with surrounding temperature conditions that can be quite variable. But at the same time, there was still work to be done on finalising the development. We were fully aware that there were major improvements to be made to the system before we could speak of a marketable finished product. There were issues of calibration drift, certain mechanical aspects had to be improved, the ergonomics of the system and the software had to be reviewed and the cost of a system was still too high. We entered a phase of searching for partners to finalise the product. During a conversation in June 2018 with Richard HUILLERY (Thermoconcept) at a meeting of the COFREND working group “Alternative to MT and PT”, he told us about his partner Edevis and its skills in industrialization of NDT means by thermography, in particular their LTvis product integrating laser excitation. Edevis appeared to us as a reference in the field. In the end, we are very complementary: Framatome owns the intellectual property to be developed and Edevis has the capacity to develop this intellectual property as a developer/integrator. Small bonus: Edevis already has its international distribution network, of which Thermoconcept is a part, which will allow us to address the market more quickly. »

The consortium between Framatome, Edevis and Thermoconcept was officially launched on 15 January 2019 following a very fruitful day of discussions at Edevis’ premises in Stuttgart. Its aim is to:

Offer a product at an appropriate price

Axelle ELRIKH summarizes the role of each one « One of the great advantages of this consortium is the complementarity of the 3 parties involved. Thermoconcept, at the initiative of the meeting between Framatome and Edevis, will be in charge of the marketing part in the non-nuclear sectors and of the communication around the product. Framatome constitutes the central core by bringing all the intellectual property linked to its expertise and its hindsight on the technology used in the Active Photothermal Camera. It will also be responsible for marketing in the nuclear sector. Finally, Edevis completes the consortium by bringing its know-how and skills in the field of the development and mechanical and technical integration of thermography NDT products. »

Another important part of this project concerns the standardisation and certification of the method. Yannick CAULIER, who participates in the Afnor/A09B “Non-destructive testing – thermography” working group which, among other things, is drawing up a standard on laser thermography, talks to us about this aspect « Framatome Intercontrôle has been involved in French and European standardisation groups for several years now. Several generic standards have already come out on thermography, on vocabulary, on how to check the functioning of a system, on how to set up a standard, etc. The next one to come out should concern laser thermography. Framatome Intercontrôle is also involved in a working group at COFREND entitled “Alternative to MT and PT” in which thermography has been widely discussed. One of the conclusions of this working group is that thermography certification should be launched, also covering the nuclear field. In fact, there are already certifications for infrared thermography, but they are only valid for other industrial fields and do not allow the certification of nuclear operators. The CIFM committee (Industrial Committee for the Manufacture and Maintenance of Metallic Materials), which is working on valid certifications in the nuclear field, will be called upon for this purpose. We are confident that infrared thermography, and more specifically laser thermography, will soon be governed by appropriate standards and certifications. »

The last stage of this vast project: its marketing!

The official launch of the Active Photothermal Camera (CPA), whose name may well change in the coming months, will take place during the COFREND Days in June 2020. But don’t worry, you can already order your system now, for an estimated delivery in the first half of 2020.